You may have noticed my fondness for old book pages - I don't take some perverse pleasure in destroying books, contrary to what my daughter may think - but they do add that certain something to a project. This paper is from one of my current favorite old books, its a Readers Digest encyclopedia  full of definitions, drawings and diagrams.
Another of my new favorite 'things' is homemade texture paste. It gets an 'ohh, ahh' from me everytime, don't ask me why but I'm always surprised when it turns out. I use acrylic paint, pva and talc - measurements? of course not, just a blob of paint and glue, then add the talc until you get the consistency you want. When you mix it you'll be sorely tempted to add water, but DON'T, just keep mixing and it will incorporate, promise. Then you just smear it through your stencil and let it dry. I've also done this with bicarb, which gives a lovely gritty texture. 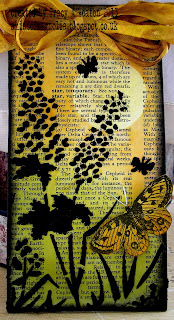 I've entered into a swap on a facebook group I joined. We're all altering composition books for our swap partners. My partner Rachel, likes pastels, so I've gone with a bit of a shabby chic thing. Hope she likes it. 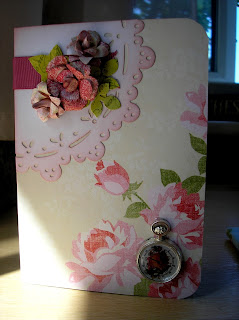 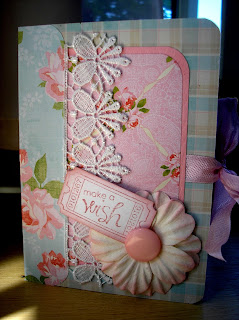 ... is what we say to the dog when she's beside herself with excitement, and that's exactly how I was over the weekend. A few weeks ago, I entered a DT call for Sheena Douglass' Inkoids over on facebook. It was one of those things you do on a whim, thinking you don't really have a chance, then you see the competition and are even more convinced that you've no chance. But all along my cheerleader has been saying 'but mum, you're really good' see, she had far more faith in me than I could ever have. Well, then I got a facebook message that Sheena wanted to get in touch, and my innards went to mush - upshot? I'M IN!!!!! I am an Inkoid Oh my, there was beaucoup squealing and I still don't feel it's quite sunk in, but I continue to bask in the glory and SOOOO look forward to the challenges ahead, and maybe think about acting on a whim more often, you never know........
Posted by Tracy Heaton at 15:09 4 comments:

Tutorial for using a WRMK Envelope Board to make file tabs

My new toy arrived this morning - the WRMK Envelope board. I love WRMK tools but initially didn't think I'd use this particular one, until I saw that you can use it to make your own file folders. When I started to play with it, I realised I could probably make file tabs with it too, so I did! Take a look.


It took me far longer to figure out how to make the tutorial slideshow than it did to work out the tabs! If only it was as easy as messing around with paper.
Posted by Tracy Heaton at 16:52 No comments:

Happy Father's Day to all the dads out there. Today I'm sharing the card I made for my husbing; I've used stamps by Andy Skinner, Docrafts and crafty individuals map as well as my fave french script stamp into UTEE. 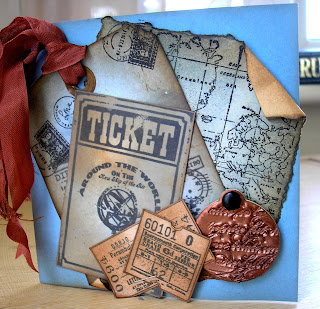 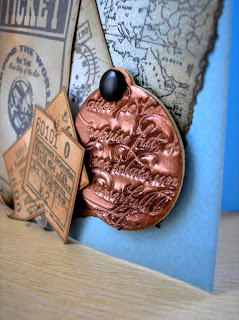 My directorial debut. This is the mini I blogged earlier plus a second one I made for my daughters friend.

Posted by Tracy Heaton at 18:10 No comments:

This was a real quickie junk journal made from patterned papers, envelopes and tags, along with a few die cuts - inspired by Michelle at The Paper Addiction. Mine measures 31/4" x 41/2" so it's a real mini mini, but with plenty of space for notes and whatnot. 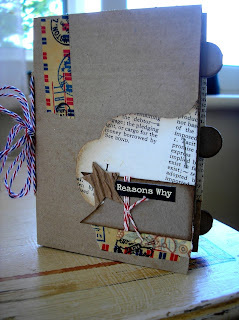 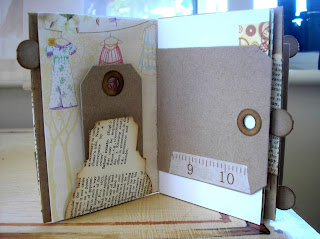 Buoyed by my finished Shabby Wench, I dug out a second mannequin last weekend. I wanted to try stamping onto tissue paper for this one rather than book page - it turned out to be a much better finish as the tissue is much more mold-able. When the tissue was dry, I inked it with Victorian Velvet DI and then painted Rock Candy Crackle all over. Once dried, I painted on diluted Black Soot to highlight the cracks. During the drying time, I made my own patterned paper and die cut it to make a ton of paper flowers; whilst the flowers turned out really pretty, much of the detail of the paper has been lost and I might as well have just inked the paper for such small die cuts. 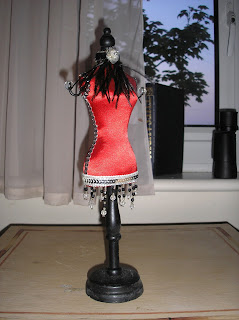 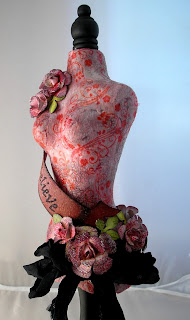 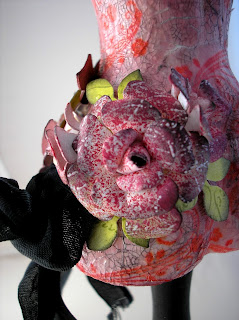 Yesterday was a very productive day for me. Whilst I had my morning brew, I had my usual internet mooch and found lushness at Ranger. So much inspiration there, but I was really taken with Tammy Tutterow's fused glass technique. I loved it, but I'm going to have another go as mine turned out much too dark and lack the definition that Tammy's have. 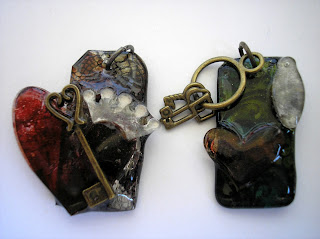 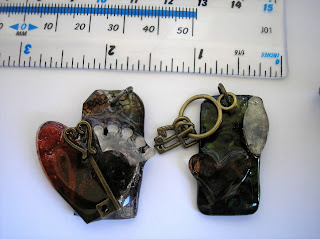 As you can tell, they're really tiny so next time I'll scale up to help with definition.

I was also taken with Lisa's pliable beeswax technique. Lisa used a texture tread, which I don't have (yet!) so I thought this was something to try at a later date, but then I decided to give it a go on an unmounted grey rubber stamp - what's the worse that could happen right? Well it worked to a degree - my UTEE blew everywhere due to my eagerness to play and I certainly think the treads are a better option than a stamp, but I'm still pleased with the result. I inked my stamp with versamark and then brushed on some mica powder to help it release. Again, this is something I will try again and experiment. 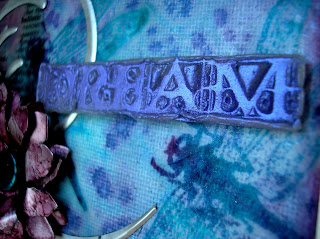 The wax technique became part of a mixed media canvas. I started with a salted inky background, added  dragonflies stamped onto tissue paper which I stuck down with brushed beeswax. I stamped into a thicker area of wax and highlighted this bit with mica. Then I die cut some metal drinks cans for the flourish and flowers - the flowers I then inked with alcohol inks. Finally, I added my pliable beeswax technique plaque. 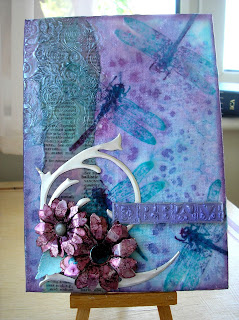 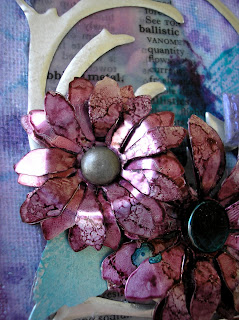 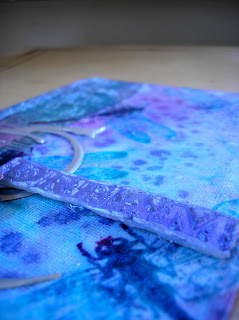 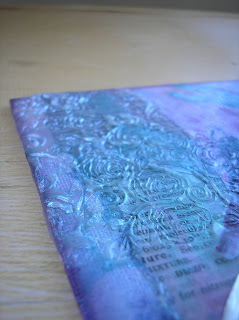 So I ended the day creatively satisfied as evidenced by my filthy mitts - if I needed another way of measuring how creative I've been it would surely be by how mucky I get. If I'm not stained and glued up, I mustn't have  been trying hard enough! 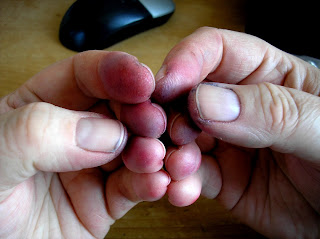 Tracy Heaton
Hi and welcome to my blog, where I'd like to share my crafty bits and pieces with you. I've been crafting as long as I can remember, initially with fabric, but after our daughter was born, I discovered papercrafting and although I still play with fabric and yarn now and again, I mainly work with paper now.

For Sale on etsy 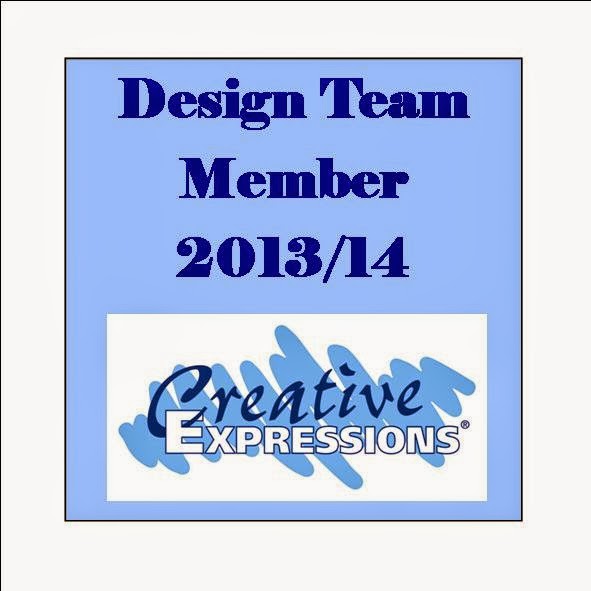 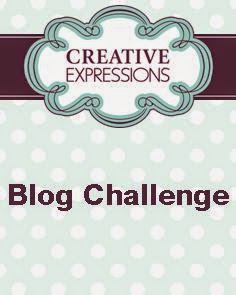 I design and write for Papercraft Essentials 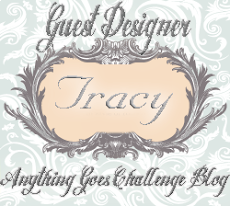